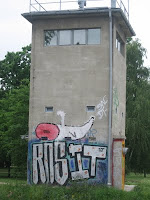 Interesting article in today's Guardian newspaper highlighting the top ten books about the Berlin Wall, the epicentre of so much Cold War fiction and the embodiment of the East-West tensions right up until its demise in November 1989.
The writer - Suzanne Munshower - has Len Deighton's Berlin Game - my particular favourite - as her number three choice, citing the centrality of the wall to lead character Bernard Samson's efforts to get to the bottom of the mystery of the apparent Soviet mole at the heart of London Central, necessitating numerous crossings, the last of which leads to his capture and interrogation by KGB major Erich Stinnes. She writes: "Out of several books set in Berlin, Berlin Game is one of his most compelling. Spymaster Bernie Samson crosses and recrosses East Berlin checkpoints as he schemes to get an operative out of the east and discover who's double-crossing him. Somebody's got to lose, but it won't be the reader of this sly, sardonic tale."
Of her other choices, she picks mostly books in the English language (or those which have been translated from the German), including Anne Funder's Stasiland - which highlighted the extraordinary lengths to which the Stasi would go to monitor suspect citizens, creating as they did so the ultimate big brother state where neighbour spied on neighbour - and also Peter Schneider's The Wall Jumper, a fictional account by a West Berliner's of the disparate lives of a group of Berliners, all affected in some way by the looming presence of the wall. It's not a book I've read, but I'll be seeking it out.
Expect, in the next few months leading up to the November anniversary, an increasing amount of media commentary on the Wall, its cultural significance and the new stories emerging from the files. Fascinating stuff.
Posted by Deighton Dossier at Wednesday, August 26, 2009