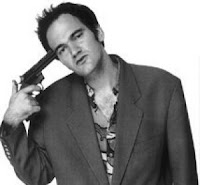 Quentin Tarantino wants to re-make Game, Set and Match? That's what he's told the media in the UK today, according to the Press Association, Slashfilm, Screening Log, igm and many other sources.
This is the second time I've heard Quentin Tarantino quoted in a newspaper or magazine about his desire to remake Deighton's classic thriller. The first time was 2008 here, when Inglourious Basterds was starting production. Once? Well, you could put down to a directorial flight of fancy. Twice - and in the context of a press interview for the same film? Well, that suggests he's been thinking about this while shooting his current movie in Europe.
He's obviously a fan of the novels. Perhaps he's seen the 1988 original TV series which, while well made and true to the script, with over 13 episodes proved too much for the ITV-watching public back then as it was a ratings flop? As Deighton subsequently pulled the plug on any further showings, it seems unlikely.
Game, Set and Match (more accurately, Berlin Game, Mexico Set and London Match) is the story of British spy Bernard Samson, who has to deal with the consequences of the ultimate betrayal as he discovers his wife is not cheating on him...she's cheating on her country as a long-time KGB mole working at the heart of British intelligence. The story arc develops as the care-worn, family man copes with the idea of his wife living on the other side of the Berlin Wall, seemingly intent on finishing his career.
Tarantino is quoted thus: "One of the things I am musing about doing is the trilogy of Len Deighton books, Berlin Game, Mexico Set and London Match. The story takes place in the Cold War and follows a spy name Bernard Samson. What is attractive is the really great characters and the wonderful opportunities of British and German casting."
What can we read into that? I need to hear a bit more detail, or solid outputs from the movie rumour mill over the next six months before I give this credence.
But it's damn intriguing. Is Tarantino - not averse to subverting existing genres - the right man for a classic Cold War tale? Who would play Samson? What about KGB man Erich Stinnes (Daniel Brühl, the great young German actor, has been used by Tarantino in Basterds, but he must be too young, I think). Angelina Jolie as Fiona?
Is it feasible? The timing's auspicious - it's soon the twentieth anniversary of the fall of the Berlin Wall. But then again, Berlin's changed out of all recognition - can the city be recaptured in all it's Cold War glory by CGI? Is Game, Set and Match do-able with lots of blood and guts and a mid-eighties, ultra-hip soundtrack.
Now I'm writing about it, the prospect intrigues me further. If we're never to see the original TV broadcast again (watching it on VHS-to-DVD copies is never wholly satisfying), then maybe a film is the next best thing?
Watch. This. Space.
Posted by Deighton Dossier at Thursday, August 13, 2009