I recently did some searching of various newspaper archives and found this interesting article from the Daily Mirror newspaper from late in 1987, during the filming of the Granada TV mini-series Game, Set and Match, based on the three Len Deighton novels of the same name (which was broadcast in Autumn 1988).

Famously, it recounts how - given that the Berlin Wall still existed at the time, and filming behind the Wall was, unsurprisingly, not allowed - the producers had to improvise when filming the many scenes requiring actor Ian Holm (as Bernard) and others to be in Eastern Europe.

For the scenes in Gdansk Railway Station, Manchester's Victoria Station (now majorly different in layout) stood in, thanks to the addition of some Polish signage and Eastern Bloc cars.

For example, Bolton Town Hall stood in for Gdansk, in the scene where Bernard goes behind the Iron Curtain to meet with Yuri Rostov to seek his defection, the failure of which leads Bernard to flee Eastern Europe via an escape across the wall (a scene which is told in flashback in the books, but which provides the opening scenes in the TV mini series that provide a context for explaining Bernard Samson's position back in London Central, desk-bound.

Other filming was done in and around the North West (the series was produced by Granada TV, the regional commercial TV station in England which formed part of the ITV network). For instance, the village of Great Budworth near Northwich stood in for Cosham (which is actually on the south coast of England in the books), for the scene where Bernard and Werner discover the body of McKenzie in the departmental safe house, left there by Erich Stinnes, who is seeking to undermine Samson's position within London Central by pinning the murder on him.

The two-page article from the Daily Mirror, which explores other aspects of the production (including the filming in West Berlin and Mexico), was part of the pre-launch publicity around the series which, despite Granada TV's largest drama budget up to that point, ultimately failed to prove the smash hit that was expected. Famously, due to disagreements with the producers during the making of the film, the commercial rights for the series were withdrawn by Len Deighton, meaning the series - and its many North West locations - haven't ever been broadcast again on British TV, or released on DVD. 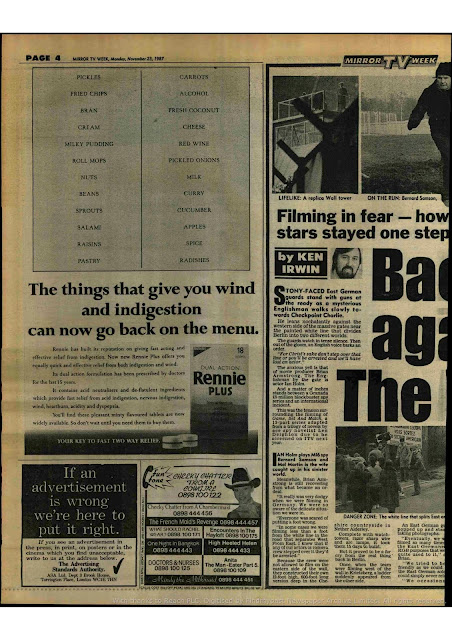 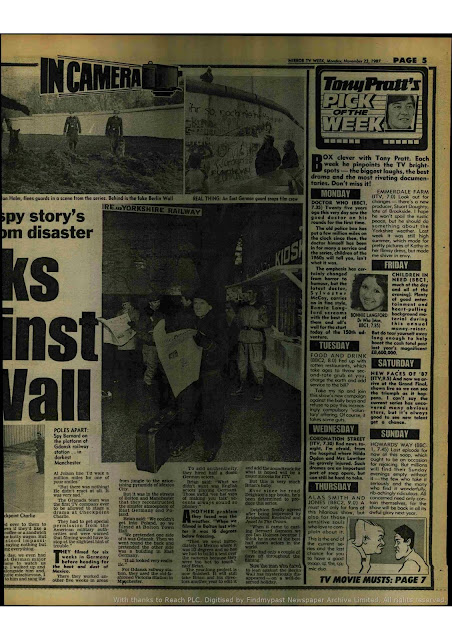