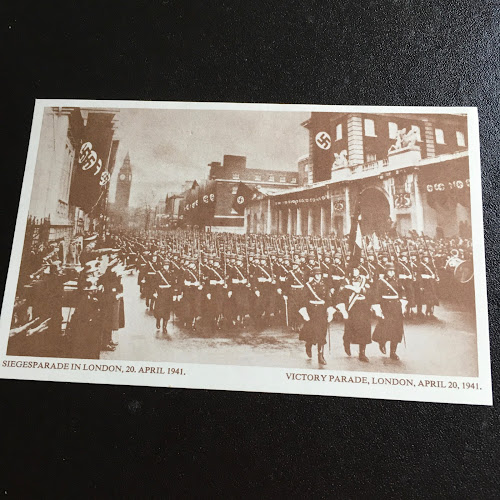 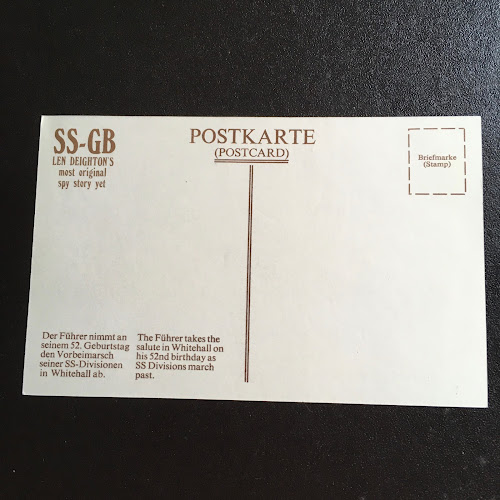 Designed by Raymond Hawkey, it shows on the front the 'Siegesparade in London, 20 April 1941', divisions of Waffen SS marching confidently down Whitehall to mark the victory of the Nazis over the British which forms the central conceit of Deighton's famous 'alternative history' thriller, which was made into a series by the BBC.
The image was also used on the dust jacket of the UK first edition.
On the back, in English and German, it states that "the Führer takes the salute in Whitehall on his 52nd birthday as SS Divisions march past," along with a legend that SS-GB marks "Len Deighton's most original spy story yet," just in case anyone picking this up mistakes it for real.
And that's not that out of the realms of possibility. Like most things Hawkey produced, it is exquisitely done. Pre-photoshop, the angle of the photograph and the perspective of the marching soldiers is perfectly aligned to create the illusion of a conquering army. The sepia colouring, and the quality and weight of the cardboard of the postcard is absolutely as it should be. It looks convincing.
You can see the marketing angle adopted by Deighton's publishers: authenticity is the watchword.
They wanted potential readers and booksellers to believe that the book was the closest thing to a reliable answer to the question 'What would have happened it the Nazis had won', as is possible. What better way to do that then by recreating the answer visually?
A part of the same marketing push is the booklet of SS-GB 'Hitler stamps', also produced by Hawkey, which famously was so authentic that is allegedly fooled a number of antique stamp dealers upon its release (though I feel this may be aprochryphal, a story shared by collectors and philatelists alike).

So, that was my quarry. I already had a copy of the stamps purchased a number of years ago, but the postcard had eluded me. I would have to buy both items.
I had seen one photo of the postcard in an article in a specialist collectors' magazine, but nothing beyond that.
This week, that changed. I have a regular search on eBay for Deighton items, and peruse it every so often to keep an eye out on the global marketplace of books and ephemera.
Most of the time it yields little I don't already have, but this last week - in a genuinely exciting moment - I spotted it on eBay.
A postcard AND a set of stamps on sale. At a bargain price (way below the market value of £400-450 for which SS-GB stamp booklets alone - rare as hen's teeth - go). I 'watched' it, and put in a bid, a little over the price asked to give me some wiggle room.
On Monday, the auction was to end.
I sat in front of my computer, in anticipation, the eBay listing open. I was still the only bidder. 1m 50s and counting down.
I upped my bid by £10 ... just in case.
45s.
Would I be outbid by another collector? Surely, there must be others out there who know the provenance and value of these items, sold here for a massive discount on the market price?
0s.
A brief pause.
"You have won the auction."
I breathed easier.
One bid was all it took to end fifteen plus years of curiosity and regular checking of the global market for Deighton-related items which, while not a patch on the market for Ian Fleming's Bond books, has a certain size and, as the number of books and items in circulation diminishes, increasing value.
I paid so far under the odds that I felt some sympathy for the seller, who perhaps expected the keen starting price to generate a flurry of bids for collectors.
But most of all, I feel a sense of satisfaction that my collection - which over the years has given me a great deal of pleasure and connected me with some interesting fellow readers and, of course, the author himself - was one step further to completion.
It's a feeling that explains why, I imagine, most collectors collect books, or the books of one particular author.
There is a finite amount of 'stuff' out there, of varying value and number.
For serious collectors - and I'm thinking in particular of a friend who is widely regarded as one of the top Ian Fleming collectors in the UK - completeness is everything. Gaps in a collection shout loudly and often, asking to be filled.
Sometimes - and certainly in the case of Bond books - that can require a second mortgage.
In the case of the elusive SS-GB postcard, it required me to outlay just the cost of a few books or take-out pizzas.
The only question now: what next to hunt down?
Posted by Deighton Dossier at Thursday, June 18, 2020