In the current marketing man (or woman)'s tool box, digital is everything - targeted pop up ads, viral videos, gifs, animations, banner advertising are all now essential to raising reader awareness of a new title and turning that awareness into revenue.

I often think that, as a result, we have lost something in the world of books - physical ephemera and well designed advertising that, when seen, I suspect had much greater impact. Certainly, as a collector,  I'm glad that the authors I collect - and of course, especially Len Deighton - wrote in a pre-digital age that, like paper fossils, left behind so much ephemera and other traces of their books to be found by the dedicated fossil hunter.

That's why I was struck by some examples from archive editions of The Bookseller - the trade publication for book shops in the UK - from the 'sixties and 'seventies of just how straightforward and one-dimensional the marketing of Len Deighton's books was - in the sense of being physical, and limited to advertising and 'point of sale' - and, as a result, how creative the book companies had to be to come up with new ways of ensuring the booksellers themselves did their part, and displayed and sold the books in a way that would maximise revenue for all parties.

When you have the likes of designer Raymond Hawkey in your corner, or the marketing minds of the Penguin Group to draw upon, then an author like Len Deighton was already in a position of some advantage.

The fifties, and in particular the sixties, was a time of great change in book selling, as new printing techniques and marketing methods - came into prominence as the UK economy shifted from post-war austerity to a period of economic growth and expansions. Book selling evidently became more expansive, prone to trends, energised by competition from new publishing houses, and the growing influence of mass media - particularly magazines, radio and TV - as a new source to influence consumer behaviours.

In the case of some of advertisements by Jonathan Cape in The Bookseller for Deighton's early works, their clean, black-on-white designs mirror Ray Hawkey's ground breaking covers for The Ipcress File and Horse Under Water. Even with the success of the first novel, what's interesting is how these early adverts to the trade are still all about introducing the author and perhaps providing reassurance to sceptical booksellers that Deighton was hip to the max, the next big thing, and here to stay (and therefore, well worth stocking).

The language used in the mock biographies of the author - subsequently featured in paperback versions of the novels - is notably jocular and deprecating and designed, I think, to demonstrate that the author is something fresh and new - he writes in a different way, he's not an 'establishment' writer. Presumably, Cape is trying here to convince booksellers that Deighton is a great target for their core customers - and one imagines that in the sixties - like today - the 'youth dollar' and the chase for share of spend by well-off, lower-middle and middle-class readers, who would be most likely to visit a book store (rather than a library, say), was the dollar to chase. So, the advertising should speak to them. 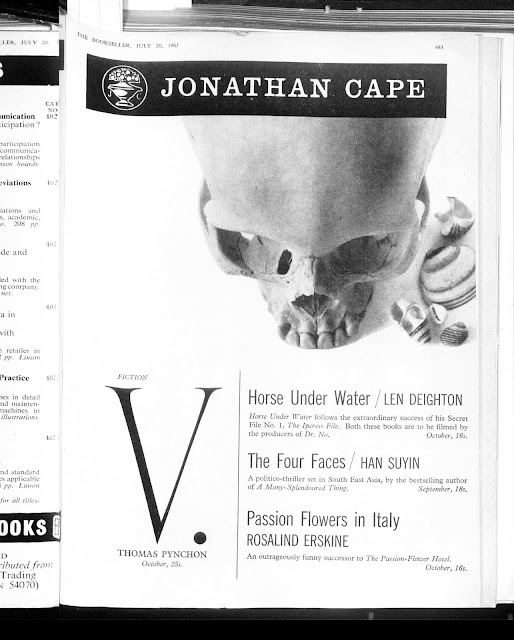 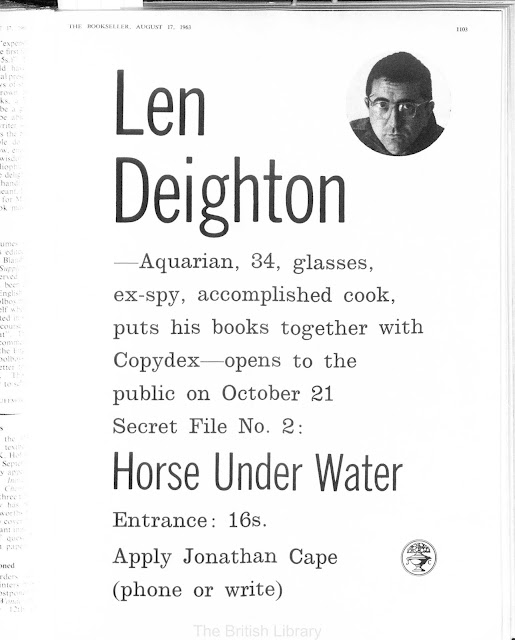 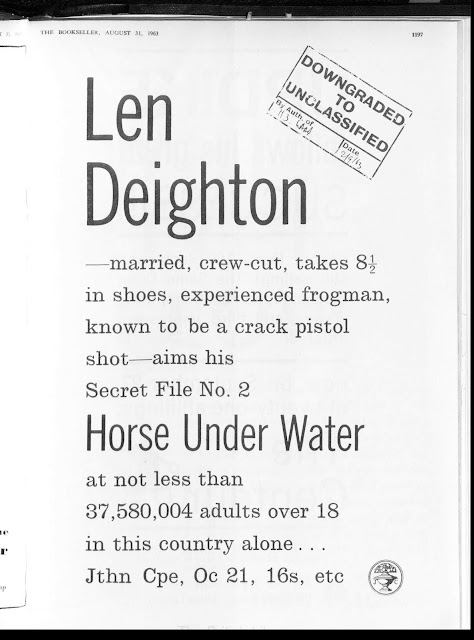 When Deighton had become a 'name' and an established author, who would have been known to many or most booksellers and reviewers in the UK, then the effort to maintain their attention on paperback releases of thrillers such as Funeral in Berlin - rather than give floor or window space to another author or a new title - had to kick up into another gear. These articles and advertisements from the magazine give an indication into Penguin's mammoth marketing efforts - having secured the rights to Funeral in Berlin in paperback (they missed out on The Ipcress File). 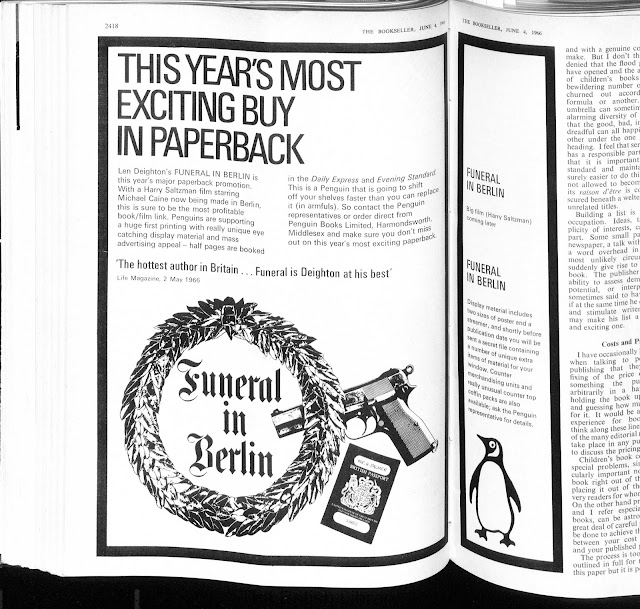 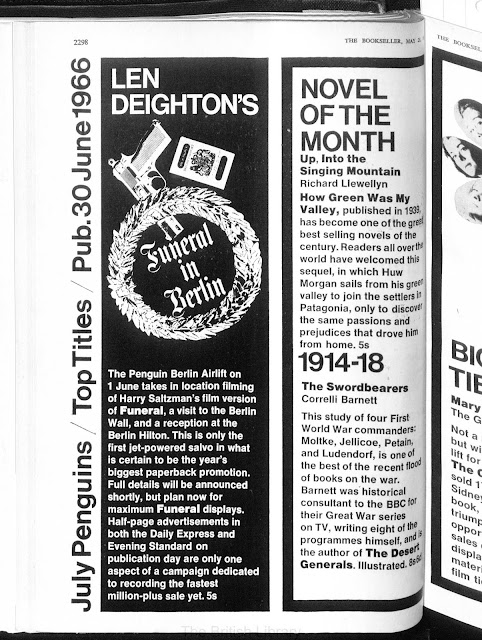 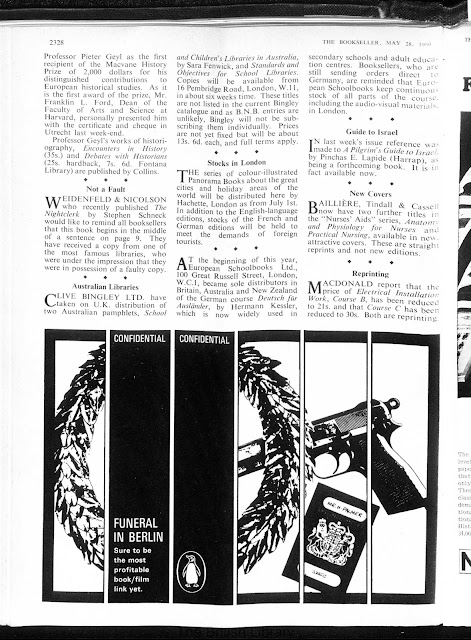 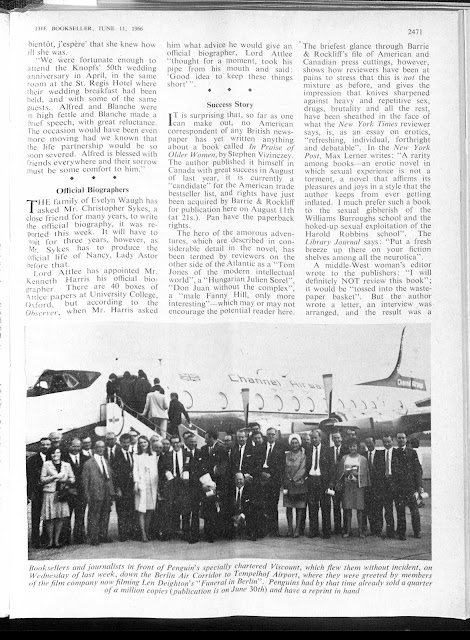 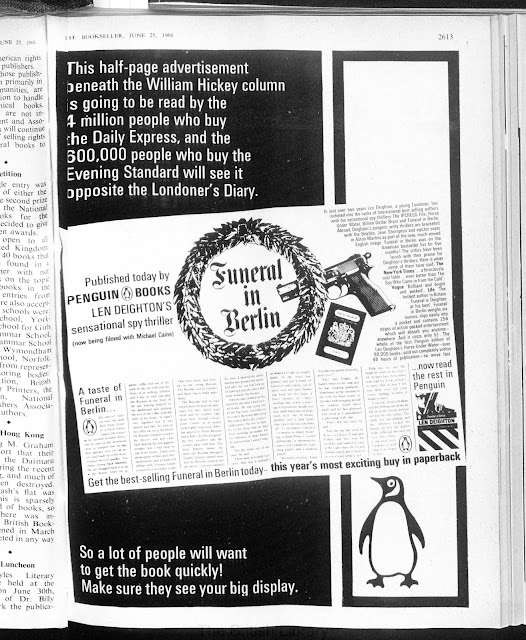 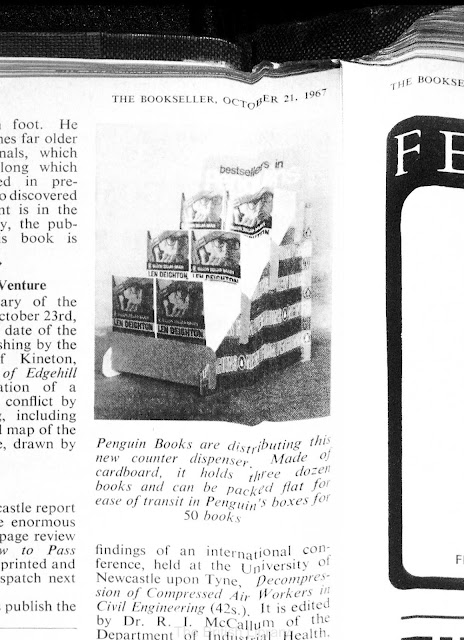 This last image, of a point-of-sale pop-up stand for Funeral in Berlin, intrigued me particularly because, after years and years of keeping an eye out for such ephemera, I've never found this or anything such as it, for sale to collectors. Ephemera - posters, bookmarks, book stands, badges etc - are, by their very nature, ephemeral, and most book sellers, after using such a counter display as this one, will - when the promotion ended - simply have folded them up and put them out for the bin men.


A window display, such as the impressive one for the Funeral in Berlin paperback shown above, is still a classic option for a bookstore such as Foyles in the Charing Cross Road - London's biggest - and I would imagine that when any of these items reach the market place (and they rarely do) they would fetch a significant dollar from collectors, because of their very rarity and their capacity to provide a story behind the book and how it appealed to the market.

It also has interest because there is a brand continuity through the whole campaign - Hawkey's famous stripes, the book title logo - which also features in the advertisements and ties into the film, on which the campaign also draws, given the increasing star appeal at that time of Michael Caine as Harry Palmer. This was all before Photoshop and Illustrator, and highlights the tremendous importance of creatives who could deliver concepts that differentiated one book from another. Clear imagery, strong colours (though, of course, the images above are in black and white), and a dramatic capacity to catch the eye is what book sellers would have been looking for.

Even for some of Deighton's lesser known books, leafing through The Bookseller offers some interesting examples to illustrate how his publishers pushed the author and the numerous subjects about which he wrote, fiction and non-fictions. So, for example, travel books The London Dossier and The Continental Dossier both had the prefix 'Len Deighton's', but in neither case were they wholly written by the author (in the latter, it wasn't at all).

However, name recognition meant increased sales opportunities, in a sense by hoodwinking readers into thinking that they are buying another Len Deighton book. 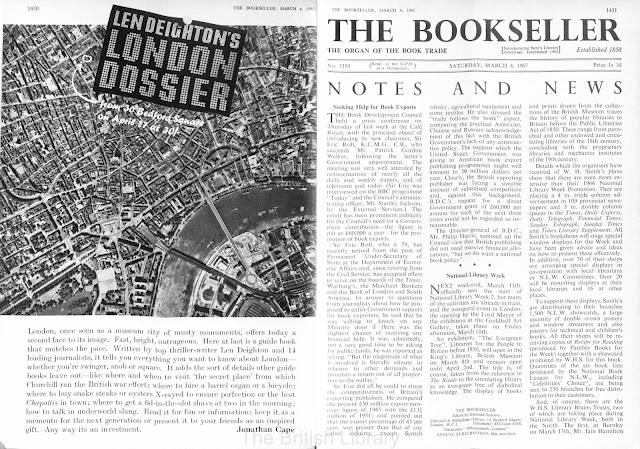 Even thought it's frowned upon nowadays, the ad-man's maxim that "sex sells" was equally a part of the book market in the sixties as any other part of the economy, and the paperback edition of An Expensive Place to Die - with the stunning image concept by Raymond Hawkey of the naked girl in the coffin - is a great example of that maxim being used, with some taste, to maximise reader awareness and drive sales. 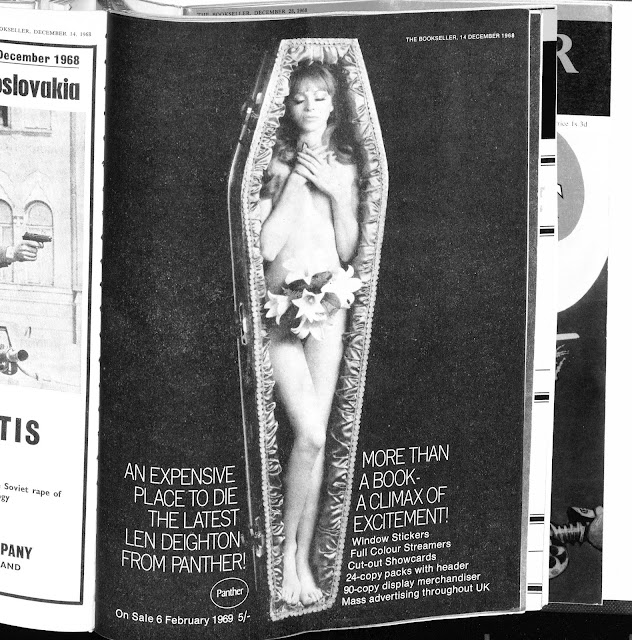 My copy of the bookstore poster of this image - about two feet in height - is one of my prized possessions, both because of the striking nature of the image, as a great example of Hawkey's 'eye', and because of its rarity, today's posters being - for the average bookseller - tomorrow's rubbish.

This wander through back issues of The Bookseller highlights that the story, and the words on the page written by an author, are just one element that contributes to the success - or not - of any work of fiction or non-fiction. Reaching the reader - who, at the time, would have had a growing choice of books to read and be enticed by - required a massive effort on behalf of the publishers and their marketing teams to grab attention - through marketing, PR, reviews, displays - while they could, and turn that attention into sales and hard revenue.

Thanks to Phil Eastwood of The Bagley Brief for pointing me in the direction of these examples.

Note: all images show are copyright The Bookseller and used under fair dealing principles set out under copyright law.