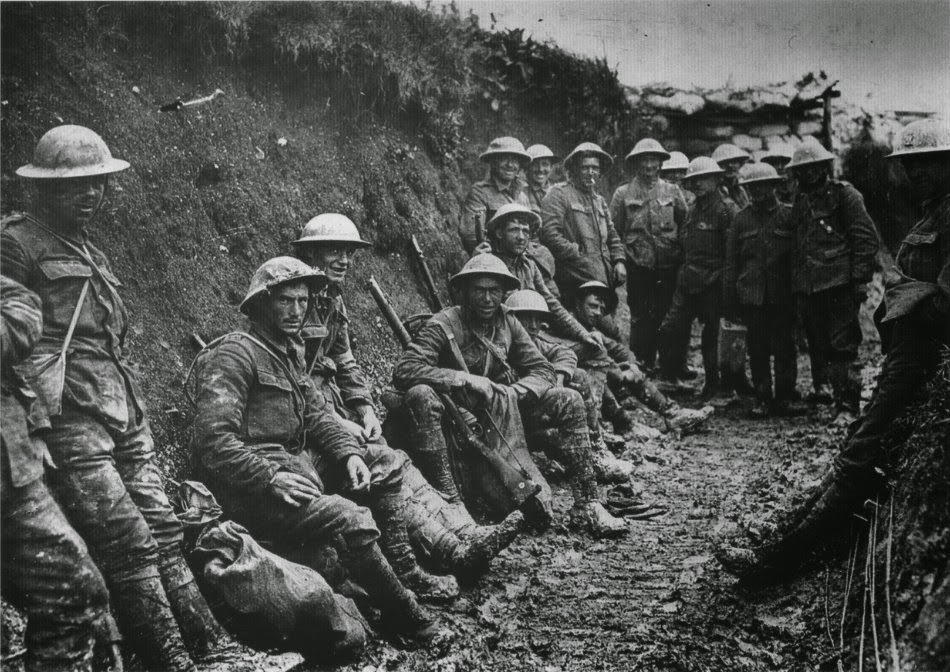 Since the start of the year there has been a noted upswing in the media’s propensity to chew over long-established WWI memes and seek, in this anniversary year, to come up with the answer to the unanswerable question of why the war happened. In doing so, it has also become a hot political and media potato, the war’s origins being a useful prism through which to view the world and defend your own and attack your opponent’s political point of view. This article by Frank Furedi hints at the reasons why WWI has such modern resonance.
Education Secretary Michael Gove MP in particular, has questioned critics of the UK’s role. In a Daily Mail article he attacked what he saw as the myth-making of the British media in portraying the UK’s war role in a negative light and questioning the role of the Army’s generals in leading the soldiery off into an un-winnable war. Special opprobrium was reserved for what he regarded as works which typify a ‘left-wing’ view of the war - the BBC’s Blackadder series and Oh! What a Lovely War, Joan Littlewood’s stage production musical using original songs from the front, both of which sought to play on the tough reality of life for the average private. Or, in the view of some, denigrate the UK’s role in countering the German menace.

Inevitably, in any such media discussion, there is more heat than light produced.

That the film Len produced of Oh! What a Lovely War in 1968 is still causing waves nearly fifty years later is singularly down to the impact of any alternative viewpoint on the war on the public and media’s collective psyches, then and now.

Len recently shared with the Deighton Dossier his own thoughts on the film, looking back on it 46 years since its production in light of this new focus on its wider social significance. It’s been a much misunderstood piece of work - as evidence by the headlines and the stories referenced above - and open to interpretation - misinterpretation, indeed - by critic and historian alike. Len himself admits he wouldn’t describe himself as left-wing, yet this work has become associated with such a tage.

Len has always been keen to make sure that his intention as the producer of the film is properly recognised. In conversation with the Deighton Dossier via email, he sets out the facts about the film’s genesis and production and addresses the misunderstandings that have arisen over the years and, thanks to the century anniversary, are likely to occur again, not least when the BBC shows the film again with an original interview with Len.

‘Surely the most intensively researched entertainment ever'

Oh! What a Lovely War’s move from the stage to the silver screen began, Len tells Deighton Dossier, when he bought a copy of the published stage play and scribbled in it to see if he could make a narrative story. It became very much a personal passion to bring it to the screen:

“The screen play was longer than the stage show and I had to research my additions so that they conformed to the formula of using only words spoken or written at the time. I spent an evening with Joan and bought the screen rights entirely out of my own pocket, as also did the production offices in Piccadilly. No one else contributed a penny and when the deal with Paramount was made it was made by William Morris representing me personally.

Each week I signed each and every cheque with the unit accountant at my elbow answering questions about each payment (This was a major lesson in film making!)”

I was very much an active, engaged producer

By all accounts, the production of the film with director Richard Attenborough - at his most demanding - was a protected affair, not without its challenges for a relatively new producer. Many myths have grown up around the film in the intervening years, oft repeated in articles and interviews by critics and stars alike and centring upon why Len chose to remove his name from the production credits. Len feels it’s worth clarifying a few points:

“Richard Attenborough was not closely involved in setting up the production of the film. He was my employee, engaged after the script was written and okayed by Paramount. By then, much of the casting was already done and the film was ready to go. Many other directors wanted the job and Richard was tremendously persuasive in seeking to get a chance to do this film with me; I’d worked with him already on Only When I Larf.

My friend Brian Duffy, the photographer, also came on board, but I was very much the driving force behind the production, even though I was not what you’d call an experienced producer. I had to become so quickly. Although the production company was called Deighton Duffy, my agent William Morris represented only me in the contract with Paramount to make the film. I had already produced Only When I Larf without Brian, while Richard Attenborough had never directed a film. Paramount at the time expressed limited confidence in Attenborough: they they kept telling me he was just an actor at the end of his film career. But, I saw something in him that he could bring to the film.

Production of a film is a difficult and all-encompassing task. While the director focuses solely on the action, the producer must pull all the other strings. So, all the casting was done by me with the casting director and discussed with my wonderful executive producer. The actual bargaining about fees (apart from minor roles), for example, was done by me sitting down with each and every actor's agents, which was no fun I can tell you!
Similarly, all the dancers and were selected by me after the shortlisting and combined audition arranged by the dance director. The same was the case for the locations in the South East of England which I visited before they were confirmed. So, I was very much an active, engaged producer.During the filming, Richard asked me to put his name as 'producer' on the call sheets because he said it would give him authority with the crew. I should not have agreed to this with hindsight, but I did. When the film was complete and my name removed from the credits, he was able to claim to be a producer, along with Brian Duffy, even though Brian had never come anywhere near the filming.

It sounds crazy to pull my name from the movie subsequently, given my efforts, but I thought I was wiping the slate in order to bring about a rational apportioning of the credits. Instead, it released an avalanche of unscrupulous wannabes associating themselves with the film’s development. One of the most strange results of these people’s actions was keeping me from the DVD edition. I was invited to do an interview, I agreed and then heard no more; Richard Attenborough is interviewed, and was able to give his view on how things went. The myths that have grown up around the production of the film may not in the wider scheme of things matter, but having given a lot of my time and a great deal of energy to a project that the film world all said would be impossible, I am rather sensitive about who did what!”

Contrary to the impression given in the recent media hubbub over the portrayal of the origins of the war in the media and the claimed lack of historical accuracy, Len is clear that his film was probably one of the most researched films ever and reflected the mixed feelings of those in the trenches and those left behind.

“What many people probably don’t realise is that all the words used in Oh! What a Lovely War were actually those of the participants at the time, so it inevitably reflected a range of opinions and the realities of life at the front.

“It was I am sure probably one of the most intensely researched pieces of entertainment ever. I was advised at every stage by historian and friend AJP Taylor. I went through that script line by line and checked it together with many other experts, so any claims of historical inaccuracy or bias are unwarranted. Uniforms, badges and civil costume where all double checked. I also engaged May Routh (later a notable Hollywood costume designer) whose full-time task was checking the clothes. I even changed some of the typefaces used on the notices because they were premature to the time line the script followed. So, I was steadfast in wanting to reflect things as they were, even though this was a piece of musical entertainment at heart.

I can say that history has proved right much of what was presented in the film. More and more material has been published in the intervening years that has endorsed the message and the themes in the film, such as the fact that historians have demonstrated that General Haig falsified diary entries. The parts of the film script that I added (for example, the prologue to show how the war began) were even more carefully checked. My research at that period and the evidence available to me did not support the suggestion that Germany wanted the war and started it.”
There will never be a single answer to the question of how the War started and whether the UK should have fought in it or not. We did, and over four years millions of people died at the front and back at home on all sides. Those facts are undisputed and it is right that historians continue to seek the truth about what happened.

Oh! What a Lovely War is one artistic interpretation of the War and its consequences, seeking to provide a soldiers’ and families’ point of view. It is a work of art first, and history second, though in its art it seeks to present a historical perspective. Whatever Michael Gove thinks of the film, as a piece of film-making, with a cast of unparalleled British acting giants including Lawrence Olivier, Ian Holm, Sir John Gielgud, Vanessa Redgrave and Sir John Mills, it made - and continues to make - an impression on the viewer.
Posted by Deighton Dossier at Monday, March 24, 2014