Following my last post, I'm very pleased to say that Len's friend and biographer, Edward Milward-Oliver - author of the excellent Len Deighton Companion and the Annotated Bibliography - has kindly prepared a short piece for the Deighton Dossier website and blog on the recent interview he did with Len for BBC South East, to talk with Len about his experiences on producing Oh! What a Lovely War.

Recalling Oh! What a Lovely War in SE1

"On a crisp, wintry afternoon last week, I joined Len Deighton at London's Imperial War Museum to film an interview for the BBC. Len rarely agrees to interviews these days, but on this occasion he was very happy to participate in a programme being produced by BBC South East Today to celebrate the film Oh! What A Lovely War as part of the commemorations of the 100th anniversary of the First World War next year.

The film has a close association with Sussex – it was shot in the summer of 1968 in and around Brighton and the South Downs. Many landmarks in the area, including Ditchling Beacon, Brighton station and the West Pier, have a prominent place in the film, and most of the extras were recruited from the University of Sussex campus.

BBC South East will be examining the legacy of Oh! What a Lovely War with film and industry experts, reliving memories of the production with those involved and exploring the importance of the landscape of Sussex in the film. They are hoping to reunite many of the cast, and the extras, as well as showing the film to an invited audience in Brighton.

In the interview, we spoke about the origins of the film, and Len vividly recalled seeing Joan Littlewood's stage entertainment shortly after it opened in March 1963, and his risky ambition to make the movie when he acquired the film rights in 1966. The celebrated director Gene Kelly expressed an interest in directing the movie, and at one time Len had discussions with Paul McCartney about possible roles for the Beatles.

When it went before the cameras in March 1968, Richard Attenborough made his directorial debut and a stellar cast descended on Brighton. Len remembered how they repainted almost the entire West Pier in silver, and along the promenade shop facades were changed, traffic signs and bus stops camouflaged, and TV aerials were hidden or removed along a 2-mile stretch of the seafront. The stage production and the film challenged the then-held perceptions of war. Soldiers were portrayed as innocent victims, lured into a futile war by generals who willfully ignored the horrific realities of trench warfare. The final scene is one of the most memorable – a long slow helicopter shot revealing 16,000 white crosses hammered into the Downs. The number of crosses is a powerful image of death but in fact is less than the number of fatalities in a single battle.

A must-see for everyone interested in the making of Oh! What a Lovely War, and in Brighton's storied legacy as a movie location, the programme is expected to air early next summer."

(Copyright Edward Milward-Oliver, 2013 - not for reproduction without permission)

Below is a photo of one of the 150 copies of the script produced by Len's production company in order to secure the rights for the film. It's arguably the most collectable piece of ephemera associated with Len's career as a writer and producer .... and one was recently up for sale on eBay at a pretty good price! 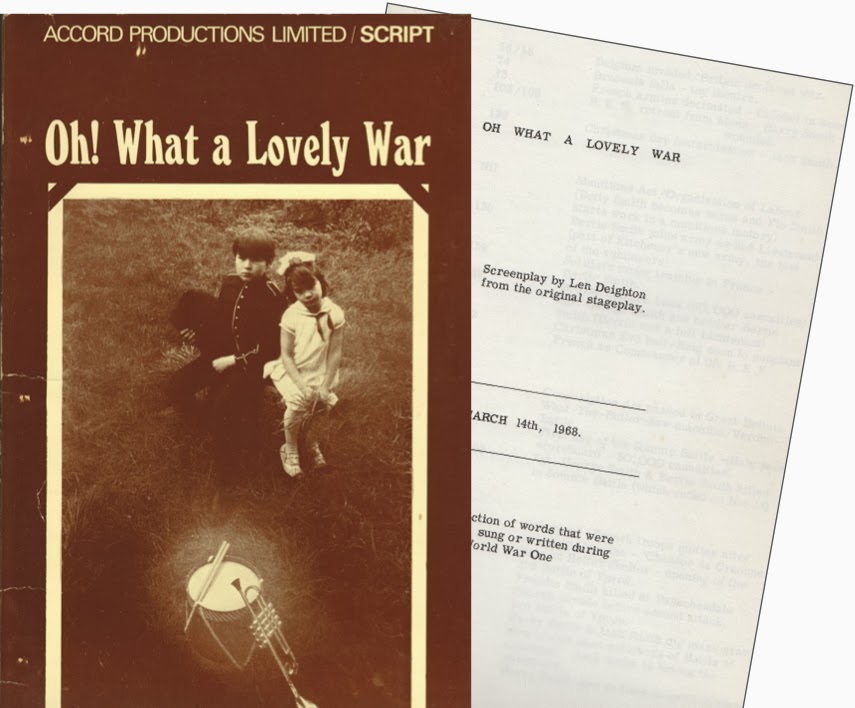 Email ThisBlogThis!Share to TwitterShare to FacebookShare to Pinterest
Labels: Edward Milward-Oliver, Oh What a Lovely War