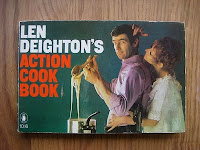 I found this interesting article on a website and culture blog The Dabbler, which looks at how Len Deighton, through his 'Harry Palmer' character from the first four novels and two films, made an association between food and style which up to that point had rarely existed for male culture. It has some nice photographs and quotes from his early Action Cook Book, making the point that Len - along with other writers and cooks - helped drag the United Kingdom out of something of a culinary desert in the early sixties.
Posted by Deighton Dossier at Sunday, September 08, 2013