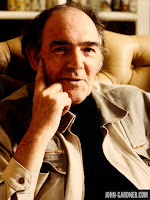 His son has got in touch with The Deighton Dossier to point out that new editions of his father's works have recently been published by Orion, with new cover jackets. Find out more on the John Gardner website. I've added the website to the list of useful links and would encourage Deighton Dossier reader to click on the link and check out this excellent, well-designed site.
Posted by Deighton Dossier at Sunday, April 01, 2012