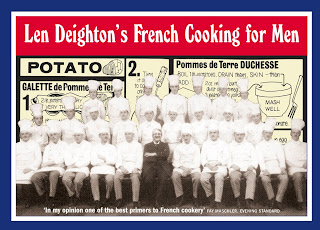 Following hard on the heel's of last year's successful reissue of the Action Cook Book for Men, this new edition is a bold refresh of one of the most influential cookbooks of the 'sixties.

Len Deighton's French Cooking for Men is an update of Deighton's guide to French cooking called Ou est le Garlic? It comprises 50 of Deighton's famous cook-strips in comprehensive tour of all the techniques and recipes with which the budding male chef can become maitre de cuisine.

In his introduction to this new edition, Deighton recalls his first visit to France in 1946 when he was just seventeen. Arriving at a Gare du Nord still full of troops and military personnel and with luxuries in short supply ('ersatz acorn coffee' anyone?), Deighton took himself off to the Grand Hotel de l'Orient. What follows was ten days of scrapes and fantastic encounters with chefs and restaurateurs, the results of which leap out of the pages of this book with the authentic evidence of the golden age of French cooking. Recounts Deighton:


"Paris was spread out before me. I shivered with delight. But I was a boy with a mission. I didn't know much about France or French cooking but I had read the greatest restaurant in the world was here. It was named the Tour d'Argent and it served  a famous dish of roast duck. The crispy breast is served as the first course. To make a sauce for it a vast silver-plated press is used to squeeze the juices from the remaining carcass. It is followed by the leg and a simple green salad. It was just the sort of performance I was ready for.

I went to the restaurant and sat alone while a sad-eyed waiter regretfully explained that a duck could not be split. It was served for two people. Recklessness overcame my disappointment, and I told him to pretend I was two people. He brightened and seemed delighted to go through the rituals, so that I had four courses, each served with a grave formality that such food deserves. When I was half-way through the second elaborate ceremony with the duck press, two Americans stopped at my table to tell me that they had decided that they had never see anyone so happy as I clearly was."

What an evocative retelling of the start of a love affair with la cuisine Française! This remains an impressive book; Deighton's knowledge of the different styles and basic building blocks of French cooking is encyclopaedic, but each recipe is recounted with care and imagination.

The new book is small but well proportioned in hard-back format. Arnold Schwartzman, Deighton's old pal and chosen designer for this new series of reissues, has done a fantastic front cover, mocking up Deighton sitting in front of a matriculation-style collection of grand chefs. Writes Schwartzman:


"Taking a lead from the author I sought after an illustration of a group of chefs that would reflect the book's slightly playful title. After considerable research I came across this vintage photograph of a large group of Continental chefs that seemed to fit the bill perfectly. They looked impressive, conveying a sense of professionalism, yet at the same time charmingly ridiculous."

Paul Bignell in today's Independent newspaper reviews the book and Deighton has provided a short interview with him as part of Harper Collins' PR push around the book (which seems to focus so far on this, rather than the Game, Set and Match reissues). Writes Bignell:


"Before becoming a writer, Deighton was a successful illustrator (his credits include the cover for Jack Kerouac's On the Road), a travel writer for Playboy and an airline steward. He now divides his time between homes in California, Guernsey and Portugal and hasn't written a novel for 15 years. In an age of technologically adept, ever-so-serious Bournes and Bonds, it's hard to imagine Deighton's sardonic, overweight, working-class spy Harry Palmer using an iPhone.

But if he were to write another novel, he says: "In the 1950s I came to know Beirut very well: cosmopolitan population, great cuisine and many stunning ancient sites. If I was to write a spy novel, Beirut would be at its centre"."

Harry Palmer in Beirut? Would be intriguing!
Posted by Deighton Dossier at Friday, May 21, 2010