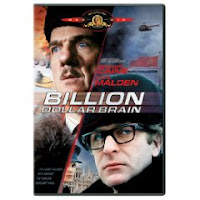 Reported today, the death at 97 of actor Karl Malden, star of numerous Hollywood films and - in this context - the character of Leo Newbegin in the film of Billion Dollar Brain, the long-time associate of Michael Caine's Harry Palmer who becomes part of General Midwinter's 'Crusade for Freedom', only to die in the snows of Finland.
Posted by Deighton Dossier at Wednesday, July 01, 2009