Is Harry Palmer coming back? 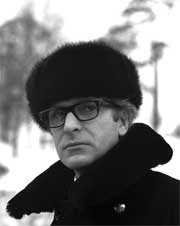 I've just found this news item popped up on MTV's website. Sir Michael Caine has indicated that he thinks young(ish) British actor Jude Law should be playing Harry Palmer in any future remake of the classic Deighton films from the sixties. He seems to think the timing is right for remakes, but there's no evidence that this is anything more than wishful thinking - I've certainly not heard anything from Deighton's publishers or seen anything else about this suggestion elsewhere. Caine also wants to see Yesterday's Spy made into a film as part of any move to getting remakes off the blocks. It is one of Deighton's more stylish stories, set in Paris, and is ripe for filming.

If not Jude Law, then who else do people think could play the 'new' Harry Palmer? I think Jude Law is a good actor, and he does have form as a 'cockney Caine', having reprised Caine's role as Alfie a few years ago. The big question is, Palmer is so obviously linked to the sixties Britain - would you get the sense sense of class tension and blokey humour between Palmer and his colleagues in a modern setting; and would any producer rewrite the stories for a modern age, or go back to the Cold War setting? Interesting idea, though.
Posted by Deighton Dossier at Sunday, April 12, 2009